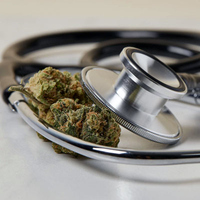 “As COVID-19 hotspots threaten to re-emerge in the midwest, I felt this information was important to share as a treating physician. The data provided suggest cannabis may suppress SARS-CoV-2 viral infections and COVID-19 related deaths and illnesses. This study reveals a promising role of cannabidiol (CBD) and its metabolite 7-OH-CBD in preventing SARS-CoV-2 infections as well as limiting the damage after infection, offering a promising therapeutic option as well.” – Dr. Patricia Hurford MD MS | MoCannTrade Health Committee Member

Researchers in the United States conducted a study showing that a cannabis plant compound inhibited infection with severe acute respiratory syndrome coronavirus 2 (SARS-CoV-2) in human lung cells. SARS-CoV-2 is the agent responsible for the coronavirus disease 2019 (COVID-19) pandemic that continues to sweep the globe posing a threat to global public health and the worldwide economy.

Marsha Rosner from the University of Chicago in Illinois and colleagues found that cannabidiol (CBD) and its metabolite 7-OH-CBD potently blocked SARS-CoV-2 replication in lung epithelial cells.

The CBD inhibited viral gene expression and reversed many of the effects the virus has on host gene transcription. The compound also induced the expression of interferons – cell signaling proteins that are produced by host cells as an early response to viral invasion.

“This study highlights CBD, and its active metabolite, 7-OH-CBD, as potential preventative agents and therapeutic treatments for SARS-CoV-2 at early stages of infection,” says Rosner and the team.

A pre-print version of the research paper is available on the bioRxiv* server, while the article undergoes peer review.

Since the COVID-19 outbreak first began in Wuhan, China, in late December 2019, the rapid spread of SARS-CoV-2 has led to more than 119.5 million infections and caused more than 2.64 million deaths.

Although recently-approved vaccines are now being rolled out in many countries, the virus is still spreading rapidly. Rosner and colleagues say this highlights the need for alternative approaches, particularly among populations with limited access to vaccines.

However, “to date, few therapies have been identified that block SARS-CoV-2 replication and viral production,” write the researchers.

More about SARS-CoV-2 and CBD

The viral genome is then translated into two large polypeptides that are cleaved by the viral proteases MPro and PLPro to produce the proteins required for viral replication, assembly, and budding.

Rosner and colleagues say that, although limited, some studies have reported that certain cannabinoids have antiviral effects against hepatitis C virus and other viruses.

Furthermore, an oral solution of CBD is already approved by the US food and Drug Administration for the treatment of epilepsy. 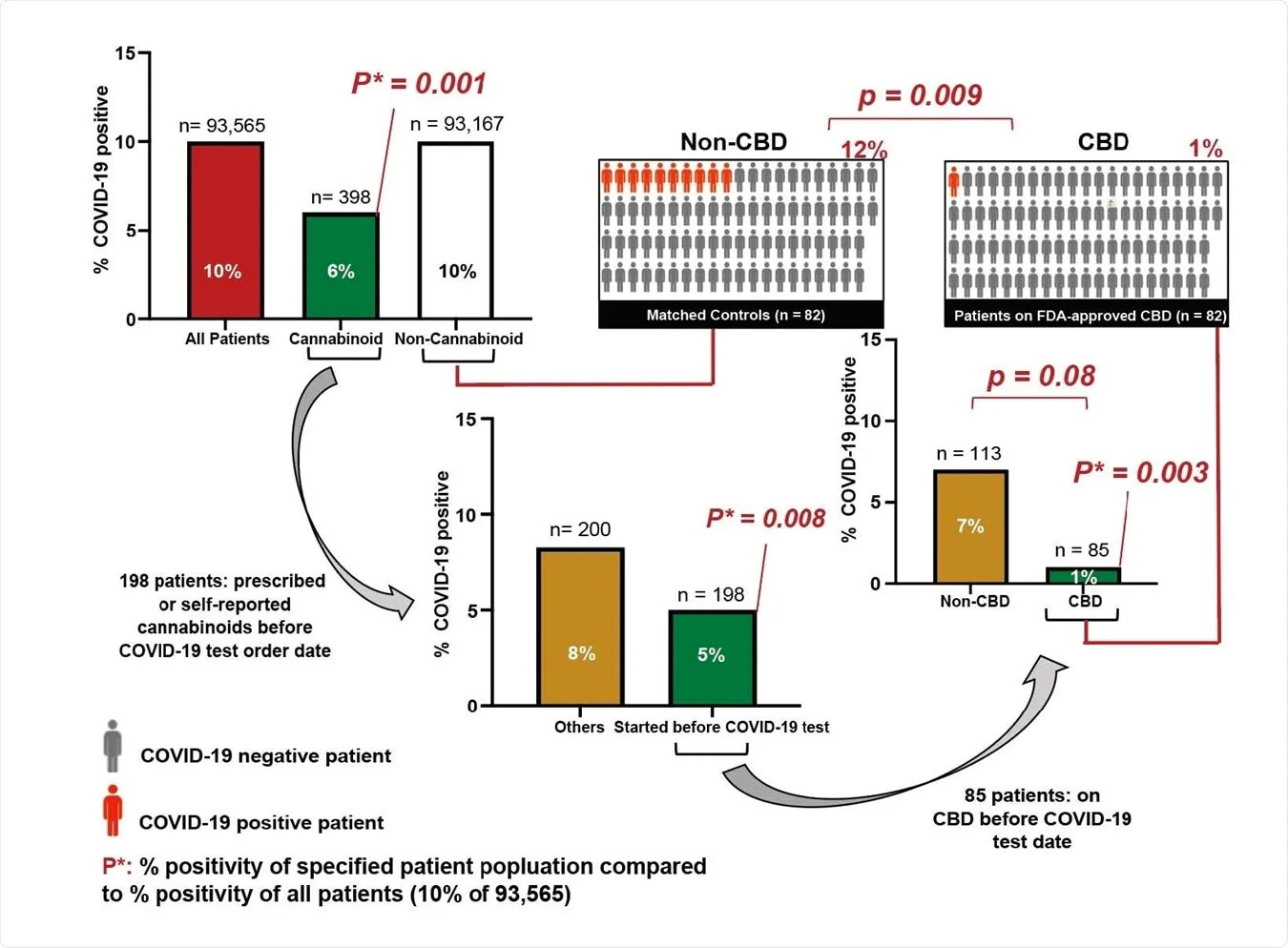 High Dose CBD usage in patients is significantly correlated with a reduction in COVID-19 positivity. Associations between reported cannabinoid medication use and COVID-19 test results among adults tested at the University of Chicago Medicine (total n=93,565). P*: p-values of percent positivity of the specified patient population compared to percent positivity of all patients (10% COVID-19 positive among 93,565 patients). Middle right: 85 patients took CBD before their COVID test date. Upper right: 82 of the 85 patients took FDA-approved CBD (Epidiolex®) and were matched to 82 of the 93,167 patients (Matched Controls) with a nearest neighbor propensity score model that scored patients according to their demographics and their recorded diagnoses and medications from the two years before their COVID-19 test. P-values were calculated using Fisher’s exact test two-sided.

What did the current study involve?

To test the effect of CBD on SARS-CoV-2 replication, the researchers pretreated A549 human lung carcinoma cells expressing ACE-2 (A549-ACE2) with 0-10μM CBD for 2 hours before infecting them with SARS-CoV-2.

Analysis of the cells 48 hours later showed that CBD had potently inhibited viral replication in the cells.

Since CBD is often consumed as part of a Cannabis sativa extract, the team investigated whether other cannabinoids could also inhibit SARS-CoV-2 infection, especially those with closely related structures.

Remarkably, the only agent that potently inhibited viral replication was CBD; limited or no antiviral activity was exhibited by the other structurally similar cannabinoids tested.

Furthermore, the CBD metabolite 7-OH-CBD, the active ingredient in the CBD treatment of epilepsy, also effectively inhibited SARS-CoV-2 replication in the A549-ACE2 cells.

When the researchers assessed whether CBD might prevent proteolytic cleavage by Mpro or PLpro, they found CBD had no effect on the activity of either protease.

This led the team to hypothesize that CBD targets host cell processes.

Both SARS-CoV-2 and CBD triggered significant changes in cellular gene expression, including the expression of several transcription factors.

Further analysis of host cell RNA showed that the virus-induced changes were almost completely reversed, but rather than the cells returning to a normal cell state, the CBD+virus-infected cells resembled those treated with CBD alone.

What about interferon signaling?

Given that infection with SARS-CoV-2 is known to suppress the interferon signaling pathway, the researchers tested whether CBD could suppress viral infection by introducing this pathway.

Some genes were induced by CBD in both the absence and presence of SARS-CoV-2, including genes that encode interferon receptors and mediators of the interferon signaling pathway.

In addition, CBD effectively reversed the viral induction of cytokines that can trigger a deadly hyperinflammatory response called the “cytokine storm” during the later stages of infection.

“Thus, CBD has the potential not only to act as an antiviral agent at early stages of infection but also to protect the host against an overactive immune system at later stages,” says Rosner and the team.

SARS-CoV-2 incidence was lower in patients who took CBD

Strikingly, the incidence of SARS-CoV-2 was only 1.2% among the patients prescribed CBD, compared with 12.2% among the matched patients who had not been taking CBD.

“The substantial reduction in SARS-CoV-2 infection risk of approximately an order of magnitude in patients who took FDA-approved CBD highlights the potential efficacy of this drug in combating SARS-CoV2 infection,” says Rosner and colleagues.

Important Notice: bioRxiv publishes preliminary scientific reports that are not peer-reviewed and, therefore, should not be regarded as conclusive, guide clinical practice/health-related behavior, or treated as established information.